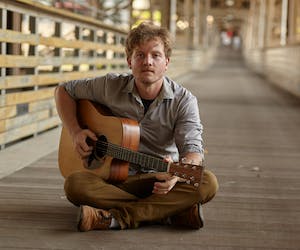 Jack Tell is a graduate from UWM Milwaukee studying contemporary Fingerstyle guitar performance and composition. With music inspired by the works of Andy Mckee, Pierre Bensusan, Leo Kottke, Antione Dufour, Kaki King, Michael Hedges, Tommy Emanuel, Stefano Barone as well as many popular influences coming from classic rock artists such as CCR, The Beatles, Led Zeppelin, and 90s rock such as Incubus and Foo Fighters, Jack also has played in numerous bluegrass jams, and is a supporter of modern indie folk music such as Ben Howard, The Lumineers, and Fleet Foxes, Jack plays guitar within the greater Milwaukee area along side numerous groups and individuals as a solo performer and collaborator. On top of being a gigging instrumentalist Jack also teaches lessons out of Brass Bell music store in Whitefish Bay WI.

Back to all events